May 9, 2018 | Posted under Blog , Latest News , Newsletter
Dear friends, I have the pleasure of sharing with you some of my artistic projects for the coming months, including recitals in Argentina and Chile, lecture-recitals in Canada, concerti by Mozart and Beethoven and a tournée in China finishing with a performance in London.
On May 9th, at 7:40 pm, I will have the honour to inaugurate the Universidad de Chile Piano Series 2018. This year’s cycle is dedicated to Beethoven’s Piano Sonatas and will take place at Teatro de la Universidad de de Chile.  I will be performing the three beautiful sonatas of his Op 2.
On May 22nd I will offer a special concert at Victoria College Chapel (University of Toronto) as part of the commemoration of Argentina’s National Day organized by the Argentinian Consulate in Toronto. Commented by my wife, musicologist Cintia Cristiá, in an audiovisual presentation called “Celebrating Argentina: An Artistic Portrait”, I will be performing a selection of works by Argentine composers, including classical repertoire (Williams, Guastavino, Ginastera and J. J. Castro) as well as popular pieces (Milonguero viejo, by Carlos Di Sarli arranged by Pablo Estigarribia and Tango Rhapsodie Adiós Nonino by Astor Piazzolla). For further details, you may contact the Cultural Section of the Consulate.
From May 23 to 25, collaborating again with Cintia, I will attend the Annual Conference of the Canadian Society of Music Universities (MusCan) in Edmonton, Alberta (Canadá). On Friday May 25th, at MacEwan University’s Allard Hall, we will present a lecture-recital called “Artistic Spaces: Painting and Literature in Tale a la Hoffmann: the Ringing Glass”, in which I will perform again that beautiful and demanding piece by Luis Mucillo, whose Piano Concerto version I had the honor to premiere at the Teatro Colón, more than a decade ago.
Again in Argentina, on June 30th at 9 pm, I will perform Mozart’s Concerto no. 21 in Mendoza together with the Orquesta Sinfónica de la Universidad Nacional de Cuyo, which celebrates their 70 anniversary, under the baton of Maestro David Handel.
On Saturday 4, at Centro Cultural Parque de España in Rosario, I will play Chopin’s Four Ballades and a selection of Rachmaninnof’s Etudes Tableaux. On Friday 24, my recital at Radio Nacional will be broadcasted live over radio and Internet. On September 1st, at Biblioteca Juan Alvarez in Rosario, I will be performing Argentine music. Finishing my 2018 stay in Argentina, on Friday 7th September I will perform Mozart’s Concerto no. 21 along Orquesta Sinfónica Provincial de Rosario, conducted by Maestro David del Pino Klinge. During my stay, I will also offer a seminar at Facultad de Artes y Ciencias (UCA, Buenos Aires) and serve as part of the jury of the Third Siete Lagos Piano Competition semifinals, which will be held at Goethe College in San Isidro.
Later in September, I will be flying to China through England for my first concert tour along with London Arte Chamber Orchestra, conducted by Maestro Fabricio Brachetta. Before flying back to Toronto, I will say farewell to London (for the time being!) performing Beethoven’s Emperor Concerto with the same ensemble on September 28.
Warm regards! Alexander

How can a human produce such enchanting music? Is virtuosity a sign of divinity or a devilish attribut. . .

A Tribute to Claudio Arrau: The First Three Beethoven Sonatas

On May 9th, at 7:40 pm, I will have the honour to inaugurate the Universidad de Chile Piano Series 2018. This year’s cycle is dedicated to Beethoven’s Piano Sonatas and will take place at 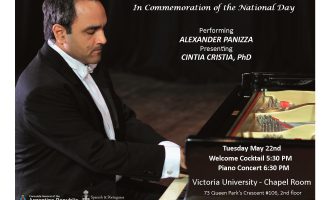 On May 22nd I will offer a special concert at Victoria College Chapel (University of Toronto) as part of the commemoration of Argentina’s National Day organized by the Argentinian Consulate in Toron. . .

These are some press articles that have been published in relation with Alexander Panizza's performances: In March 2017, Alexander performed in a concert cycle that included both from the classical. . .

Listen to my music for free! 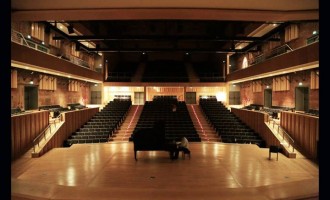